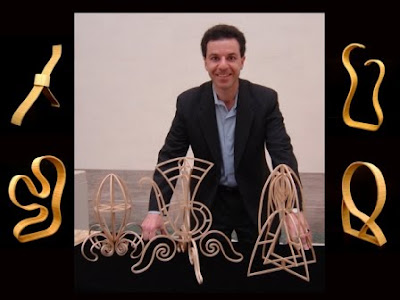 Creativity has always fascinated generations of art lovers and public in general, especially when created with less orthodox mediums.
This is the case of the art created by Steven J. Backman.
Steve's toothpick sculptures transmit a dedication to art and the gratification upon creating something unique.
Following its tradition of approaching artists and public together, The Art Inquirer contacted the artist who kindly accepted to give an interview where he talks about his toothpick art.
TAI why did you start doing sculptures, was this your first medium of choice for something more serious ?

SJB I love using my hands to create sculptures. This has been important to me since I was a child. As a matter of fact, I enjoyed taking things apart and putting them back together. Radios, electronic components, tools and wood objects were just a few of the many items I disassembled. I have always had an interest in knowing how tangible products are produced. The process, in addition to the materials used, has always fascinated me. The first medium of choice I used to create art was toothpicks. Over time, I experimented with wood and model making materials. A multi level tree house I made when I was a child incorporated my love for architecture and my fascination with building materials. It withstood the elements of Mother Nature. This home way from home contained a sliding window, skylight, electric powered television and a customized wall unit with speakers. A deadbolt secured the front door.

TAI Do you make previous sketches ?

SJB Most of my sculptures are made from my imagination without sketches. Sometimes I create thumbnail sketches during my art process.

TAI Is it common for you to be working on a scultpure and make significant modifications from the original project ?

SJB I generally stick with a concept throughout the entire process. Occasionally, I do make modifications to compensate for structural integrity. Although this may change the durability of the sculpture, It really does not change the overall look and feel of the piece of art.

TAI Do you have a preference about the shape of the toothpicks ?

SJB I prefer using square centered toothpicks in my works. Sometimes I cut off the tips to make hem more refined. Many years ago, I first started using round toothpicks. Since then, I have used many kinds.
TAI do you build smaller models (studies) before bigger ones ?

SJB I generally make the sculptures the size I want them to be. I find study models to be helpful in other mediums. Since toothpicks and glue are very time consuming mediums to work with, I find it best to approach the project as if it is the size I want it to be.

TAI If so, what kind of support(s) do you use to build your sculptures ?

SJB Every single toothpick sculpture I create is made from 100% toothpicks and glue. I do not use any other materials for structural support. This is why my art takes so long to create. Besides, it make the process much more challenging. This is why I enjoy making my art so much.
TAI Do you or have you thought about adding mechanical movements to your sculptures ?

SJB Several years ago, I created cable cars with musical bases which play "I left my heart in San Francisco." The large ones contain sliding doors which go back and forth on toothpick tracks. I always think of using mechanical devices to make my sculptures more interesting. Although I am very interested in the movement of items, I feel that my art is more effective when it is not in motion. Perhaps this will change over time.

TAI Do you build sculptures with movable parts ?

SJB Currently I do not create my sculptures with movable parts.

TAI How you make the curves, namely the vaults or domes found in some of your architectural pieces ?

SJB Not to give too many secrets away, It's a combination of patience, technique and experience. The rest is my trade secret. It is a very involved time consuming process. As previously mentioned, I only use toothpicks and glue to achieve these intricate shapes.

TAI Do you teach workshops ?

SJB I have had several toothpick art demonstrations at the Fine Arts Museums of San Francisco. Although I like to share my art process with people, I feel that it is very personal to me. It is my ways of interpreting and evolving my inner feelings while being alone. Besides being the most relaxing experience, it is a way for me to enjoy my solitude and create art while reflecting my personal feelings. This can only be accomplished when I am able to spend time with myself. I need total concentration to achieve this level of communication.

TAI Do you have any scheduled exhibitions comming soon ?

SJB Currently my art is being shown at Gallery Diamante in Carmel-by-the-Sea, California. This coming June, I will have a solo exhibition in the lobby of 500 Howard Street in San Francisco. It is the headquarters of Gymboree Corporation.
TAI what are your projects for the near future ?

SJB I am currently designing a commemorative piece for the 25th Anniversary of my business named Landmarks of San Francisco. It will be available for purchase on my website www.toothpickart.com in the coming weeks.

Born in San Francisco (USA), Steven J. Backman started creating toothpick sculptures during his childhood, however getting a toothpick stuck in the palm of his hand made him quit this hobby for several years.
Nevertheless Steven's enjoyment for his art had not been lost and in 1984 he designs a San Francisco cable car using toothpick and glue for an art project, while attending the San Francisco State University where he later received a Bachelor of Arts Degree in Industrial Arts.
After completing the assignment, Steven created other cable cars in different sizes, denoting his appreciation for these mobile landmarks from the city where he was born and in a short time he establishes his toothpick art business named "Landmarks of San Francisco" which he still presently operates.
In 1985 Steven decides to create a thirteen feet long toothpick sculpture of the Golden Gate Bridge using 30000 toothpicks.
Completed in 1987, this sculpture proves to be a success during the 50th Anniversary Celebration of the Golden Gate Bridge, arousing the media attention, including worldwide publications.
Steven is invited for a guest appearance on the "Afternoon Show", following an interview on "Good Day New York" and "CBS Sunday Morning".
In December 1990 his Golden Gate Bridge toothpick sculpture was certified by the District Engineer of the Golden Gate Bridge, Highway and Transportation District.
The sculpture is currently on display at "Ripley's Believe It or Not" Museum in Hollywood, California.
The artist's passion has led him to create other amazing toothpick sculptures including a four and one half foot long fully operational electric powered and radio-controlled yacht that he painstakingly built with 10000 toothpicks.
But his sculptures are not only built with thousands of toothpicks, the artist also likes to carve miniature sculptures from a single toothpick, such as a replica of the famous Burj Khalifa, a building standing tall at 828 metres.
Steven J. Backman's "The Essence of Patience" motto trully illustrates his determination in creating unique pieces of art that may be enjoyed by future generations and provide inspiration to other artists.
Steven's art has been exhibited in several venues, including the Cable Car Museum, San Francisco City Hall, Empire State Building, Fort Mason Center and de Young Museum.
Currently his art is being shown at Gallery Diamante in Carmel-by-the-Sea, California.
This coming June, Steven will have a solo exhibition in the lobby of the headquarters of Gymboree Corporation, 500 Howard Street in San Francisco.
Foundry Square IV in San Francisco will be showing Steven J. Backman's Toothpick Sculptures from June 30 through September 29, 2010, between 7h00 and 19h00 (Mon-Fri)
Steven J. Backman can be contacted through his toothpickart website
Posted by José Carrilho (Go Detail) at 7:24 PM