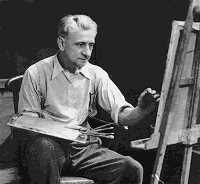 Born on March 11, 1895 into a family of Loire watermen at St Germain des Prés, a small village in Anjou, Constant Le Breton started his career as an apprentice with a company of decorators first in Nantes, then in Le Mans before being admitted to the Ecole des Arts Décoratifs in Paris, however his financial income did not permit him to continue the courses.
Drafted in 1915, he saw action at Gallipoli in the strait of Dardenelles (Turkey) and later in Serbia. After the war, he settles himself in Paris as a wood-engraver and earns a good reputation as a book illustrator.
Later he's awarded a scholarship by the Blumenthal Foundation and quickly wins a reputation for himself as a painter, especially of portraits.
Constant Le Breton made friendship with other artists such as Antral, Belmondo, Brayer, Derain, Luce and Segonzac.
Hailed as a portrait painter, among his works are the portraits of Ingrid Bergmann, Béatrice Bretty and Charles Dullin, however the artist did not disregard the other subjects including landscapes, still lifes and elaborated interiors, namely representative his family life.
Constant Le Breton died in Paris in February 1985.
A large number of his paintings are in parisian museums and private collections in France, Germany, Greece, Switzerland and U.S.A.
Now for the first time in Portugal between May 21 and August 8, 2010 (closed on Mondays), the Calouste Gulbenkian Museum presents a retrospective of his works.
Situated in the Temporary Exhibition Gallery of the Calouste Gulbenkian Foundation, the "Constant le Breton (1895-1985)"exhibition is comprised of 67 works includes 52 oil paintings and 15 watercolours.
Offering a retrospective of his major themes, the show is divided into six different sections which document the variety of his production, apparently influenced by major painters from the second half of the 19th century, such as Boudin, Carot or Manet.
The Art Inquirer will keep its readers informed about important future exhibitions at the Calouste Gulbenkian Museum.
Posted by José Carrilho (Go Detail) at 8:50 PM